matplot is a group of numerical tracks plotted in a common track space, sharing the same Y axis. Each individual track is rendered as a trending curve along the genomic axis, and can be told apart from other tracks using different colors.

An example of matplot can be found in this hub:

The definition of matplot track is similar to that of methylC track. Following is a matplot example as defined using JSON datahub:

The tracks attribute points to a list of member tracks. Each member track can be defined in its own fashion. Currently only bedGraph and bigWig track types are allowed to compose a matplot track. 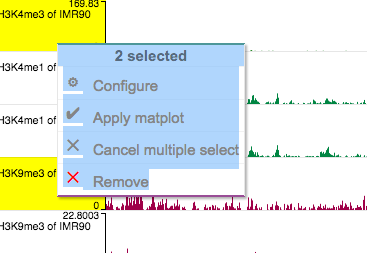